I write with the bittersweet news that Mike Reed ’75, vice president for strategic planning and institutional diversity, will be leaving us this August to become Vice President for Institutional Initiatives at Dickinson College. He’ll be working closely there with Dickinson President Nancy Roseman, known to most of us as our former dean of the college and professor of biology. 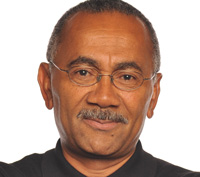 At Williams he’s served in admission and in alumni relations; as a volunteer, including on the Board of Trustees; and as a senior administrator. The creation of his position in 2006 was part of an evolution in the college’s structures for supporting diversity work and the role that it played in broader college planning.

The many important developments he’s led here include formation of the Diversity Action Research Team, which has built a model of how to measure the degree to which members of all groups are thriving at Williams and of how to use those measures to guide new initiatives. He also developed the position of associate dean for institutional diversity, currently held by Karen Swann, and oversaw the re-visioning and re-dedication of the Multicultural Center into the Davis Center. During his time here the percent of our fulltime faculty who are U.S. people of color has gone from 17% to 22%.

Mike was a leading force in the launching of the Creative Connections Consortium—a group of liberal arts colleges that works to increase the presence within the academy of members of historically underrepresented groups.

In response to COVID-19, activities and programs at Williams are canceled or postponed until further notice. See information and updates on Williams COVID-19 response.