The Passing of Irwin Shainman

The earth beneath the college tilted yesterday with the death of Irwin Shainman, Class of 1955 Professor of Music, Emeritus, and a fixture here almost continuously since his arrival in 1948. 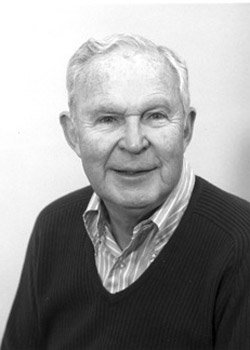 Once a bugler for his Scout troop in the Bronx, he went on to earn the Premier Prix in trumpet at the Paris Conservatory. He played professionally in and around New York City, but, as he told it, while crouching in a fox hole in eastern France during World War II, where he earned two Purple Hearts, he said to a buddy in the next hole, “If I ever get out of this alive, I’m going to find myself a small college in New England with a small music department.”

That he did, to the great enrichment of that college and of generations of its students, so many of whom credit him with their appreciation of and passion for music.

He eventually chaired that no longer small department and served as acting dean of the faculty. He conducted the Berkshire Symphony and led what evolved into the Moo Cow Marching Band. For his many contributions to music at Williams, the large rehearsal hall in Bernhard is named after him.

He also left his mark on the cultural scene by co-founding the Williamstown Theatre Festival, which he later served as president.

At the same time, Irwin was the best company you could have—at the dinner table or on the golf course. He was naturally personable, was erudite without pretension, and could be hilariously and devastatingly funny. You smiled just seeing him approach you on the street.

A formal obituary may be read here.

A public celebration of Irwin’s life will be held at a later date. Meanwhile, our thoughts are with his family, including his wife Bernice, daughter Joan ’76, and son Jack.

The Passing of Olga R. Beaver
Office of the President MENU