As provost and president, respectively, we’re delighted to announce, following a national search, the appointment of Liz Creighton ’01 as dean of admission and financial aid. Liz, who currently serves as deputy director of admission, will assume the new role May 15. 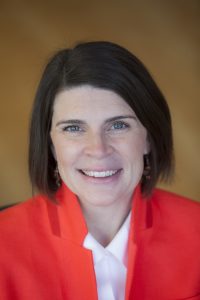 This is a new position, reporting directly to Dukes as provost. As dean, Liz will provide leadership to our efforts to attract and support talented students from across the country and around the world. She’ll use her leadership skills, vision, and creativity to further strengthen Williams’ position as a national leader in both admission and financial aid work, while breaking new ground in shaping how these two areas collaborate to deepen the socioeconomic diversity of our student body.

Liz joined the admission staff at Williams in 2006 and served in several roles before being named deputy director in 2011. As deputy director she has overseen the daily operations of the admission operation and guided work that enabled us to enroll the most ethnically and socioeconomically diverse student body in college history. She has overseen important initiatives including improving our use of data to aid in recruiting and enrolling exceptional students from low-income backgrounds; the expansion of Windows on Williams and Williams Previews, which provide funding for 350 talented students who couldn’t otherwise afford to visit campus; creation of a remote college counseling program for 200 high-achieving, low-income students; and partnering with our communications office to develop a comprehensive communications strategy and publications stream.

Before coming to Williams, Liz worked in Harvard University’s Development Office, where she managed the fundraising portfolios of the university provost and directors of the Harvard Stem Cell Institute, serving on a team that raised $40 million for the institute during its first two years.

Liz earned her bachelor’s degree in history from Williams in 2001 and a Master’s degree in education from the Massachusetts College of Liberal Arts in 2010.

We want to thank the members of the search committee—Danielle Gonzales, Bum Shik Kim ’19, Rhon Manigault-Bryant, Ngoni Munemo, Marlene Sandstrom and Chris Winters ’95—for their diligent work that has led to this wonderful outcome for Williams.

Please join us in congratulating Liz on her new role.

Vice President for College Relations Appointment
Affirming our commitment to Title IX, inclusion, and each other
Office of the President MENU