The Passing of John D. Eusden

I am sad to report the death of John Eusden, the Nathan Jackson Professor of Christian Theology, Emeritus, who served for many years as college chaplain and was involved in the development of the Center for Environmental Studies. 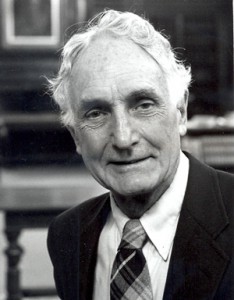 John was a large presence at Williams in more ways than one. While the tall, former Harvard swim captain and former Marine pilot loomed forcefully from the pulpit, he also helped lead the college into engagement with the Civil Rights Movement, ecumenical and interfaith initiatives, international studies, and environmentalism.

His volunteer Civil Rights work in the south was often in association with Martin Luther King, Jr., with whom he was held in 1963 in the Birmingham jail from which King wrote his famous letter. Two years later he participated in the King-led march from Selma to Montgomery.

A deep interest in Asian religions led to his directing new Williams programs in both Hong Kong and Kyoto. The development of his scholarly interests is reflected in his five books, which began with a study of the Puritans and later included Zen and Christian: The Journey Between and The Spiritual Life: Learning East and West.

Ordained in the United Church of Christ, he also served as interim minister in several local churches.

Many will recall seeing him around town as a reed-thin and passionate skier and cyclist in virtually all forms of weather.

Our thoughts are with his family at this time. We will pass along information about arrangements when they’re known.

A memorial service is scheduled for Saturday, June 1, at 9:30 a.m. at the First Congregational Church in Williamstown.