The Passing of James MacGregor Burns 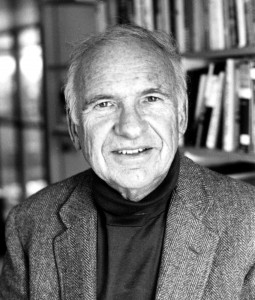 I am sad to report the death this morning of one of the best known and most influential faculty members in the college’s history.

James MacGregor Burns, the Woodrow Wilson Professor of Government, Emeritus, co-wrote what in its time was the most widely used college text book on American politics (Government by the People), won a Pulitzer Prize and National Book Award for his work on F.D.R., founded the field of leadership studies, was a confidant of the Kennedy Family, and even ran once for the U.S. Congress. He lectured widely across the U.S. and abroad, and he appeared frequently in the media. It’s fair to say that a great many people first heard of Williams through his work.

Jim graduated from the college in 1939, as a classmate of future Williams president John E. Sawyer. A decorated combat historian in World War II, Jim earned his Ph.D. at Harvard before joining the Williams faculty in 1947. Between then and his retirement in 1986, he gave countless students a firm grounding in American political history and played key roles in many developments at the college, including the ending of fraternities.

A selection of published obituaries:

His writing was uncommonly lucid and prolific, and it came in a variety of genres. He remained intellectually active well past his retirement from teaching, publishing the most recent of his more than two dozen books, Fire and Light: How the Enlightenment Transformed Our World, only last year.

His 1978 book Leadership is credited with launching the large and still growing field of leadership studies, for which, among many other honors, The University of Maryland named its James MacGregor Burns Academy of Leadership. He served as president of the American Political Science Association and of the International Society of Political Psychology. Williams bestowed on him both an honorary degree and Bicentennial Medal.

Few Williams faculty, if any, have ever left a stronger legacy—at the college and in the world more broadly.

Our thoughts are with his family, including his longtime companion Susan Dunn, the Preston S. Parish ’41 Third Century Professor in the Arts and Humanities, as they mark the end of a life so fully and so effectively led. We will pass on information about arrangements when they’re known.

Select Williams facilities and events are open to the public. Admission tours are available and guests are welcome at the Williams College Museum of Art, Sawyer and Schow Libraries and outdoor athletic events. Visitors are also welcome at indoor competitions and some performances and events. Proof of vaccination and masking are required for entry. See the Visiting Campus page for details.