The Passing of Frederick Rudolph

The college, and in fact higher education, lost this morning an important, even historic, figure: Fred Rudolph.

Fred served the college in so many ways. As a student, he was a junior advisor, a member of College Council and of Gargoyle, and editor of The Williams Record. As an alumnus he served as president and 50th reunion chair of the Class of 1942. 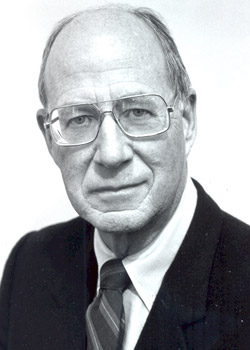 Most notably, few faculty in the past half century have had more of a hand in the development of the Williams curriculum than did Fred after joining the history department in 1951, including with the introduction of what we now call the American studies program and of African-American history. He served also as college marshal, as administrator of the Tyng Bequest, and as a member of the Committee on Admitting Women, the Bicentennial Commission, and the Visiting Committee of the Williams College Museum of Art. Alumni of several generations have paid tribute to the quality of his teaching by citing the strong positive influence he had on their academic and personal lives.

More broadly Fred married his love of American history and love of Williams to write pioneering works in the history of higher education. His Ph.D. thesis at Yale became Mark Hopkins and The Log, an insightful look at not just Williams, but of colleges and universities in general, and of the social and political history of the nineteenth century. He followed this with two classic texts in the field: The American College and University: A History and Curriculum: A History of the American Undergraduate Course of Study Since 1636. Few texts considered definitive in their field are so engagingly written, and for decades it was almost impossible to obtain an advanced degree in higher education without studying either or both of these books.

For all of this and more, Williams bestowed on Fred a Bicentennial Medal and one of his several honorary degrees, and established the Frederick Rudolph ’42 – Class of 1965 Professorship of American Culture.

Our thoughts are with his family. We will relay information about arrangements when they are known.