Val grew up in the Bronx, New York, the oldest of four girls born to a middle-class Italian-American family. She came to Williams as a first-generation college student, and she credits the financial aid she received from Williams for providing her with opportunities and experiences that broadened her horizons and opened her mind. 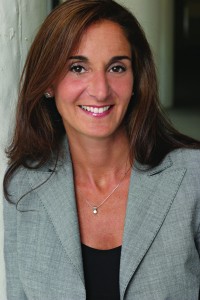 At Williams, she majored in psychology and worked as a psychology TA, played ice hockey and managed the men’s lacrosse team, and was a Junior Advisor and a Lehman Scholar.

Today she’s the CEO of Deutsch Inc.’s New York office, where since 1992 she has been the cornerstone of Deutsch’s unprecedented growth and an invaluable part of the team that redefined Deutsch’s integrated multidisciplinary offering. Val defines the Deutsch culture and spirit, and through her leadership has built a powerful company—named number two on Advertising Age’s Agency A-List in 2014, and one of Advertising Age’s and Crains’ Best Places to work. Blue-chip clients that she has touched include Johnson & Johnson, Microsoft, IKEA, Procter & Gamble, PNC Bank, Samsung, Revlon, and The Michael J. Fox Foundation.

A provocative industry thought leader, she has appeared on CNN, NBC’s The Today Show, and The Apprentice and profiled in The New York Times and The Wall Street Journal, and she is a regular contributor to Fortune.

Val joined the Williams College Board of Trustees in July 2015, and she has a long history of dedication to the college. She has served as vice chair of the Alumni Fund and has been a class agent since her graduation in 1984 (an associate agent since 1994). She was class president from 2004 to 2009 and class treasurer for the 10 preceding years. Val has long provided Williams students with internship opportunities at Deutsch and mentored students and alumni interested in careers in marketing and advertising.

Having developed early on a love for giving back and community involvement, Val is a founding director of The Hearts of Gold Foundation, helping the lives of at-risk mothers, and she is currently serving as the chair of the Board of Trustees of Buckley Country Day School. She lives in the Douglas Manor community of Queens, N.Y., with her husband Dick Byrne and son Bryan.