After growing up in small-town Maine, Cooper Campbell Jackson ’89 says, “I came to Williams with a vast knowledge of cross-country skiing, the L.L.Bean catalog, and Stephen King novels, but not much else.” The college opened a new world for her, and she now travels the globe as vice president for business affairs and development at the gaming giant Electronic Arts. 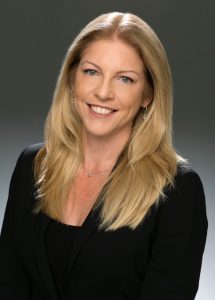 In her role at EA, Cooper oversees global content partnerships and licensing for the company’s games across various platforms and subscription services. She secures licensing deals with national sports leagues and players’ associations, motorsports organizations, automakers, and Hollywood studios. She negotiates development and production deals for streaming TV series based on EA games and oversees relations with creative and production talent, as well as music deals with composers, artists and labels.

Cooper attended Williams on a full financial aid package and points to the college’s aid program as a central factor in her ability to graduate—the first woman in her family to complete college. While enrolled she earned spending money working in Dining Services, printing t-shirts in the Williams Co-op, and waitressing during the summers. Her academic interests were wide-ranging: a political science major, she studied international relations but also enjoyed taking courses in literature and art history. Her junior year at the Williams-Exeter Programme at Oxford (WEPO) was her first trip out of the country, and she took full advantage of the opportunity by taking tutorials, rowing crew, and traveling across Europe.

Giving back to Williams has been an important aspect of Cooper’s life and career. In addition to serving as Trustee, she is president of the Class of 1989 and an associate class agent. At various times she has also served as head class agent, Alumni Fund vice chair, and chair of her class’s 25th reunion fund committee.

Outside the Williams community, Cooper is a member of Women in Film, actively involved in furthering equality for women in the entertainment industry. She previously served on the board of Fryeburg Academy, her high school alma mater in Maine, and the California Advisory Board of The Trust for Public Land, working to protect California’s public lands and create public parks in cities across the state. Cooper lives in Los Angeles with her husband, a television sitcom writer, and their three sons, the oldest of whom is now Williams Class of 2022.

The spring semester is underway. See our Covid-19 website for strict health and safety protocols for those who remain on campus. All Williams College buildings are closed to the public and visitors until further notice.