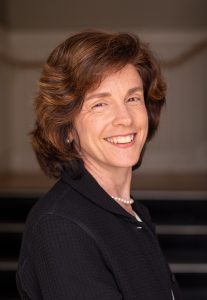 Maud S. Mandel, Williams’ 18th president, earned her B.A. from Oberlin College in 1989 and her master’s degree and Ph.D. in history from the University of Michigan in 1993 and 1998, respectively. She moved to Brown University as a visiting assistant professor, eventually becoming professor of history and Judaic studies and dean of the college—roles in which she served until joining Williams as president in July 2018.

President Mandel has engaged the Williams community in articulating a vision for the college’s future through a strategic planning effort involving faculty, staff, students, alumni, families and friends. As one of the early outcomes of the process, Williams became the first school in the nation to launch an all-grant financial aid program. The process also gave rise to strategic academic initiatives that will prepare students for a changing world in a manner reflective of Williams’ liberal arts excellence. With Dean of the College Marlene Sandstrom, Mandel also supported a major re-envisioning of residential life as a core aspect of students’ education and personal development.

President Mandel has advanced educational work at Williams, from the Just Futures Initiative—a new Andrew W. Mellon Foundation-supported grant to look at maritime history as a basis for studying the relationship between European colonization, the dispossession of Native American land and racial slavery in New England—to the college’s decision to join the new Liberal Arts Colleges Racial Equity Leadership Alliance. She has led important conversations about the role of technology and the creative arts in a liberal arts education, areas that will have a vital impact on the college’s future. She has also led the college in developing a hybrid system of courses during the Covid-19 pandemic that combined in-person classes with remote learning, enabling every student to continue their education.

Under Mandel’s leadership Williams has continued to support sustainability work on campus, which in 2022 helped the college earn a Gold STARS rating from the Association for the Advancement of Sustainability in Higher Education. Sustainable building projects that she initiated, such as the Davis Center effort, capitalize on projects begun before her arrival and now completed, including Garfield House, Fellows Hall, Fort Bradshaw and the Wachenheim (North) Building of the Science Center, which are characterized by high-performance, environmentally sustainable designs. The improvements in these new or renewed facilities complement the college’s reductions to carbon output, achieved through initiatives like Williams’ participation in the Farmington (ME) Solar Project.

President Mandel has also encouraged a culture of shared, community-wide responsibility for diversity, equity and inclusion work, guided by Vice President Leticia Smith-Evans Haynes ’99 and the Office of Institutional Diversity, Equity and Inclusion. In Fall 2020 the two charged the college’s Committee on Diversity and Community with developing guidelines for reckoning more fully with Williams’ history. Mandel also encouraged the college’s growing relationship with the Stockbridge-Munsee Mohican Tribal Historic Preservation Extension Office, which represents the historical and ongoing interests of the tribe that inhabited the Berkshires region until they were displaced by European and American settlers during the late 18th and early 19th centuries.

An accomplished historian, President Mandel has devoted her scholarship to examining how policies and practices of inclusion and exclusion in 20th-century France have affected ethnic and religious minorities: most notably Jews, Armenians and Muslim North Africans. She has explored these themes in publications including In the Aftermath of Genocide: Armenians and Jews in Twentieth-Century France (Duke University Press, 2003) and Muslims and Jews in France: History of a Conflict (Princeton University Press, 2014). She was also a co-editor of Colonialism and the Jews (Indiana University Press, 2017). Her scholarship has been recognized with fellowships from the National Endowment for the Humanities, the American Council of Learned Societies and the American Philosophical Society, among others.

In addition to her work as Williams’ president, Mandel holds the title of Professor of History and teaches as frequently as her schedule allows, including tutorials. She lives in Williamstown with her husband, Steve Simon, and their children, Lev and Ava.